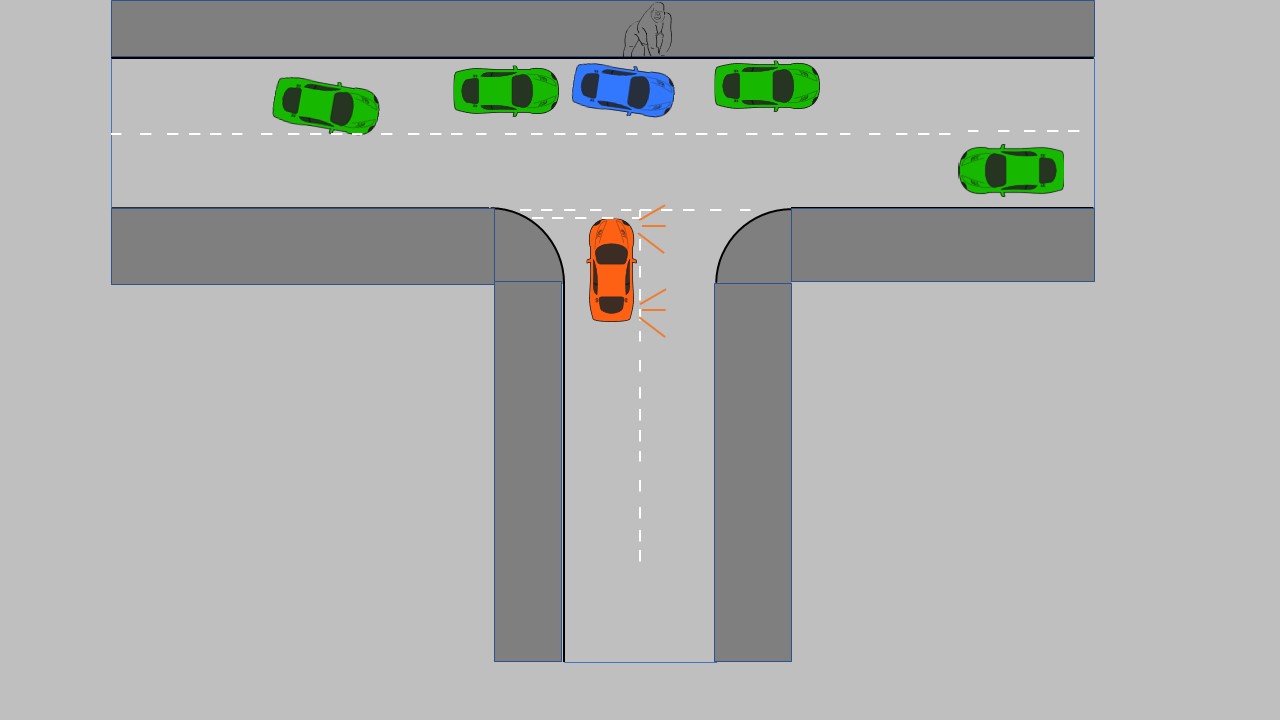 Confession time now. I picked up a driver fault during my Part 2 Instructor Test due to poor observation at a junction. The diagram illustrates what was going on. I am the orange car, emerging right at a junction, with traffic coming in both directions on the road I am joining. I am focussed on looking right and left for a gap in the traffic. After a fair amount of time, I spot the gap and start pulling out of the junction, only to be surprised by the blue parked car pulling out. The car wasn’t really blue – that’s just to illustrate the point. In fact, I think all the row of parked cars were white. Fortunately, I spotted him as I started moving, and he spotted me, and we both stopped before agreeing who should proceed. Driver fault – poor observation.

The event led me to wonder why on earth I did not see the parked car starting to move, when it was right in front of me. Then I read something about your eye only being able to focus on a very narrow field of vision, with the rest being peripheral vision. So, I was looking right and left, scanning for traffic coming from either direction, but as my head turned from right to left, I was completely blind to what was in front of me. You try it: Look right then quickly look left; Its impossible to see what is in front of you.

I think there is a thing called Selective Attention coming to play here as well. You may have heard about the Invisible Gorilla experiment. Christopher Chabris and Daniel Simons conducted an experiment where they videoed people throwing a basketball between themselves. During the video, someone dressed as a gorilla wanders onto the pitch, thumps their chest, then wanders off. They then asked viewers to count the number of times that people with white t-shirts pass the ball. About 50% of the people they asked did not spot the gorilla!! You can read more about it on their website here, where you can also see the video.

Ever since that realization, I have made point at junctions to not just look right and left, but to scan the whole area for any likelihood of someone moving into the area that I am about to occupy. I urge you to treat every driving fault as a learning opportunity and to spend a bit of time analysing what went wrong so that you don’t make the same mistake again.

So, I will just clear the windows and drive off, right?

How to hide a lorry